We’ve changed things up for our normal Reptilian Tuesday! In keeping with our scary and creepy theme this week, we’re spotlighting an amphibian! (You’ve met other amphibians such as the South American Bullfrog) This little animal is often referred to in stories about witches, or at least their eyes are! Ever heard of the eye of newt? Well this one doesn’t have scary eyes, but they have scary skin! Come meet them… 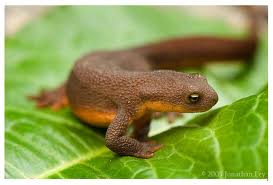 Wow! Who knew a cute little newt could be so poisonous? Well we think they are pretty awesome! We think this animal is best seen and not eaten J!