We went diving again today in the kelp forest. Our goal was to meet some of the fish who call this special place home! First up is one cool shark! Don’t worry- they are pretty shy and small :)! 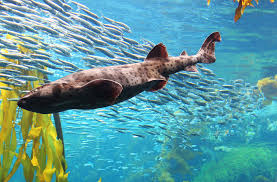 We dove at two separate times -once during the day and once at night. We knew the little swell shark would be out at night. We were so excited to spot on swimming in the water. They are very shy and often when they see divers, freeze. It’s a shark that plays opossum- hehehe!

One thought on “One Swell Shark”