We’re meeting another snake today and it’s named the Bandy-bandy! It just may be the best name ever and when we start our own elephant & horse band we’re naming it Bandy-bandy! 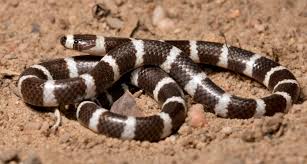 We like these cool little snakes. They are rarely seen by humans, due to being mostly nocturnal. Now if you had to name your band after an animal what would it be?