We Go on WILD ENCOUNTER at Zoo Atlanta!!

We have WILD ENCOUNTER at Zoo Atlanta

First we met outside of Slasher’s habitat. Our guide Shelby gave us instructions and some great information about Komodo Dragons! (60/72) 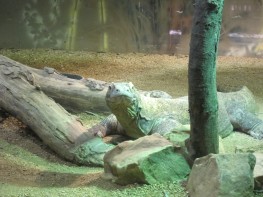 Did you know that komodo dragons live in Indonesia? They live on 3 different islands including Komodo Island. They are considered vulnerable, due to habitat loss and loss of some of the prey they eat. Slasher is a big guy and we were so excited to meet him! The humans were given booties to cover their shoes and a glove to wear on the hand that would hold the tongs!

Wow these lizards have a mouth of serrated teeth that fall out often are replaced by teeth behind them, kind of like sharks. We finally met Slasher, where he was waiting for lunch!

We were given a pair of tongs with a small mouse on the end to feed Slasher. Each person took turns giving Slasher one mouse and he chomped those down in one bite! 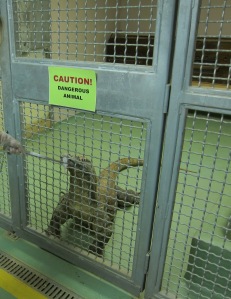 Slasher getting a mouse!

We also learned that komodo dragons have a special organ or third eye on their head that helps them detect light and dark! Isn’t that amazing? Soon, everyone had given Slasher a mouse and he went back into his habitat. It went by so fast, but WOW, it was such an amazing experience! We were so thrilled. We sat and watched him for a bit as he lounged around.

We're watching Slasher! Edmond was too short & had to sit on Ellie!

He probably was a bit sleepy after eating all those mice.  Normally you would have to head all the way to Indonesia to see a komodo up close and let us tell you, that is long trek! But all you have to do to enjoy a WILD ENCOUNTER at the zoo is get in the car! Want to learn more? Of course you do! Check out the zoo’s website! Trust us- you’ll be so happy you went!

We had such a great time meeting Slasher. We didn’t want our adventure to end, so we made a stop at the new Twiga Terrace.

Did you know that twiga is the Swahili word for giraffe? FUN! Zoo Atlanta is opening a new feeding station for giraffes, also on March 31st.  We stopped by to see the zoo’s giraffes and give them some tasty romaine lettuce. We had a hard time not eating the lettuce ourselves. The zoo has four giraffes, Mona, Glenda, Abu and Lily (the baby)!

Hanging with the giraffes!

Glenda came on over to sniff out our lettuce and to take a nibble.

We could just watch giraffes for hours! They are so graceful and beautiful!

You can feed the giraffes too! Check out the zoo’s website for more info! After such an amazing day, this elephant and horse were tired! We headed home with great memories of a fabulous adventure!

It’s a great time of year to get out and enjoy Zoo Atlanta! Did you know that when you visit the zoo and feed giraffes and have Wild Encounters that you’re helping support the animals at the zoo and their wild relatives! COOL! Zoo Atlanta is one of our favorite places and hopefully one of yours!

3 thoughts on “We Go on WILD ENCOUNTER at Zoo Atlanta!!”

Leave a Reply to Ellie and Edmond Cancel reply