We spent today bird watching again. We wanted to find a really interesting bird that is known for its amazing memory! So off we went with our binoculars in search of the Clark’s Nutcracker! 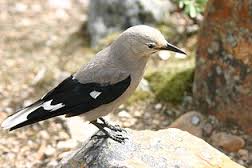 We had so much fun watching these gregarious birds in the forest! We are so fascinated by their cache behavior. Their memory is crazy. Scientist have studied these little birds to learn about how intelligent they really are. Edmond swears they keep little maps with X marks to keep up with all of those seeds!